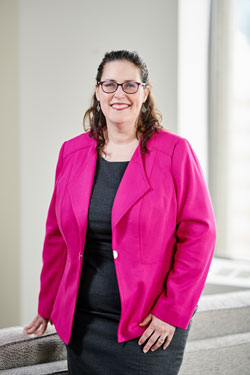 Kathleen Roussel is the Director of Public Prosecutions. She was appointed June 21, 2017.

Kathleen was Deputy Director of Public Prosecutions from 2013 to 2017. She was responsible for the Regulatory and Economic Prosecutions and Management Branch.

Previously, Kathleen served as Senior General Counsel and Executive Director of the Environment Legal Services Unit at the Department of Justice (Canada), from 2008 to 2013.

From 2001 to 2005, she was the Senior Counsel and Director of the Canadian Firearms Centre Legal Services, before joining the Department of Environment’s legal services later that year. Before joining the public service, Ms. Roussel worked as a criminal defence lawyer. She has been a member of the Law Society of Upper Canada since 1994 and graduated from the University of Ottawa Law School in 1992, having previously obtained an Honours Religion degree from Queen’s University.